✻
Not words but my Blog shall speak for me
October 27, 2010 by mahendrakumar 0 comments 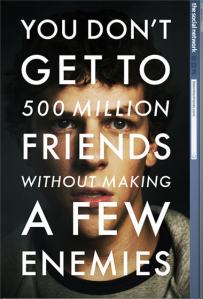 “The Social Network” will be a hit, super-hit or a flop show it doesn’t matter, it was able able to convey the message it wanted to, this is what matters the most. It brings out the story behind FACEBOOK. What’s behind the most successful social networking website in the whole computing world.

when I saw the movie I personally didn’t tried to figure out whether mark zuckerberg is good or bad guy, I just wanted to know how a undergrad kid can do a thing which others weren’t able to do.

He hacked the entire harvard network in 4 hours, got 22000 hits (hacked to get picture of girls from different houses for facemash.com).

The whole hacking process as depicted in the movie was way too amazing and geeky. Ultimate………..

The way he worked on facebook site development and, the way he conducted himself in computer classes was way too inspiring.

Doesn’t matter where the idea came from, it was great… but the way zuckerberg implemented it with his computing knowledge, this  is commendable.

Being a computer science grad student I totally liked the movie and specially the hacking part.